“IllusionQuest” is an exciting, main-stage, magic and illusion spectacular! Illusionist David Garrity and his magic team appear, vanish, pass through solid objects and even float people from the audience! The performance also features audience participation, situational comedy and is set to a custom-edited musical score!

Highlights from the performance may include a comical illusion where David’s assistant ends up all twisted up; David also teaches a volunteer from the audience how to cut his assistant in half; and “The World’s Fastest Illusion” in which time seems to stand still! David Garrity uses these illusionary elements combined with music, pantomime, situation comedy and audience participation to entertain audiences of all ages and backgrounds.

“IllusionQuest” has been seen at Mohegan Sun Casino in CT, the Tribeca Performing Arts Center in NYC and was a featured part of the entertainment package at Six Flags New England in Springfield, MA.

All showtimes subject to change due to weather.

Back to: Fair 2019 Entertainment 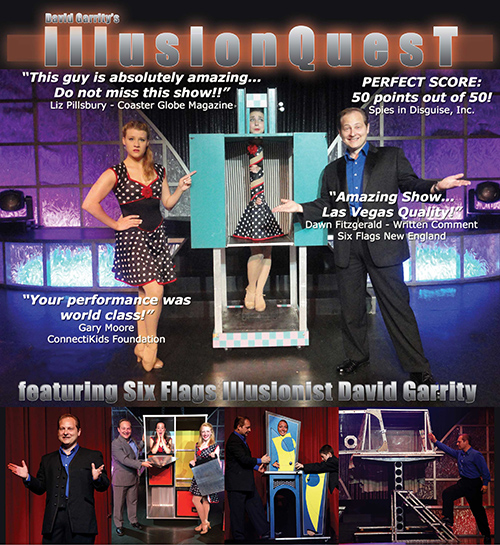